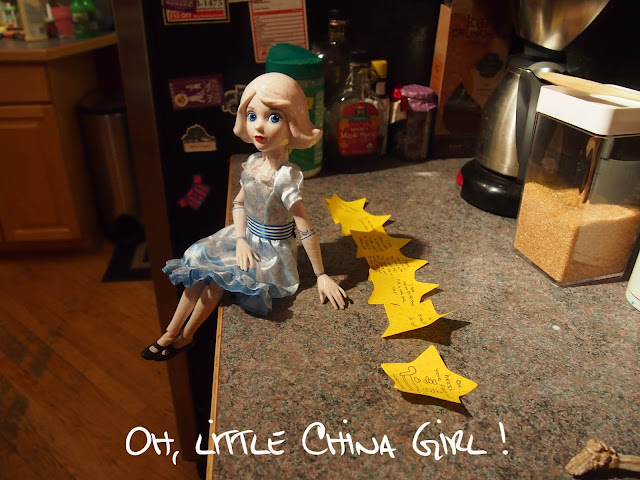 My daughter has been a great fan of Oz ever since my mother, her LaoLao, introduced her to the original film at the age of 3. She has been more than a little obsessed ever since. So it seemed a foregone conclusion that we would take her to see The Great and Powerful Oz in 3D when it came out, no matter what the reviews.
I wouldn't say that she loved it the way she loved the original, but she did latch on to one particular charachter: the little China Girl.
I'm sure that it did not escape her that this character is an orphan, left without a family or a country, and that she is desperate for a family.
Also that she is fragile and injured, but also stubborn, tough and brave.
This week, I have been sick with a flu while Q has been home on vacation. She has been amazingly patient with me, and also very grown-up, helpful and independent during my convalescence. I promised her a special reward for this, and her choice was a doll of the little China Girl from the film.
I agreed, but I told her she would have to be patient. The little China Girl (or Delicate Girl as Q has named her) would have to come to Q in her own way, and Q would have to pass some tests in order to find her.
So it was that, a couple of nights ago, China Girl and I found ourselves in a pact of complicity after Q fell asleep for the night, creating a very special treasure hunt by which Q might find her way to her new best friend.
I have to say that China Girl was a willing and capable co-conspirator in this plot throughout the night. She helped me write out the notes, draw the clues, and stick them up throughout the house for Q to find in the morning. 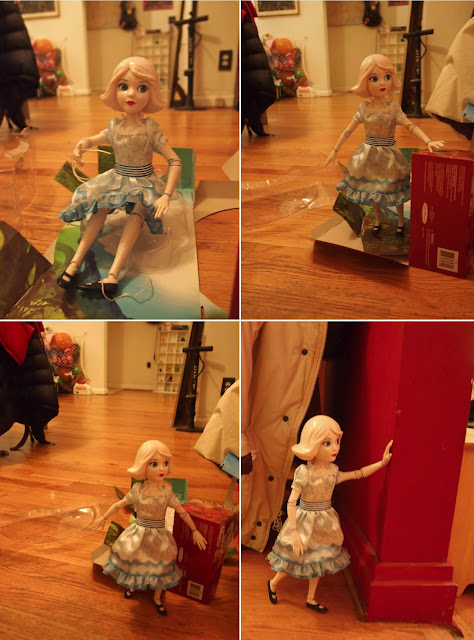 Here is China Girl escaping from the bonds of her (formidable) packaging, and setting out to discover the house and invent some clues for Q's treasure hunt. 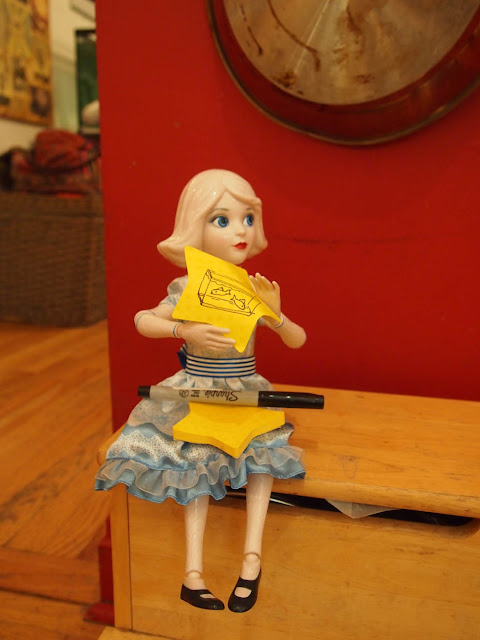 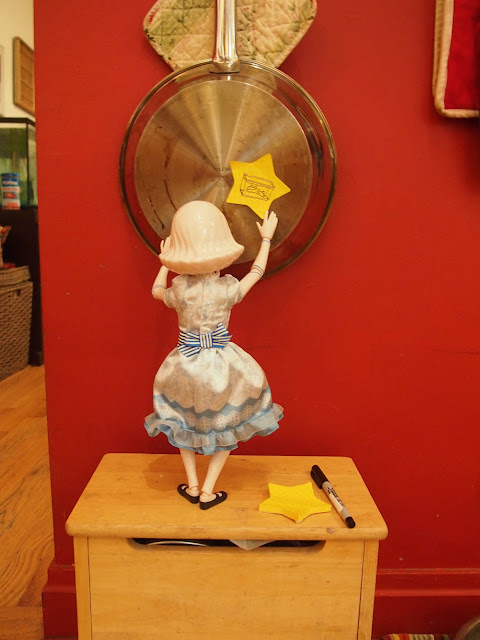 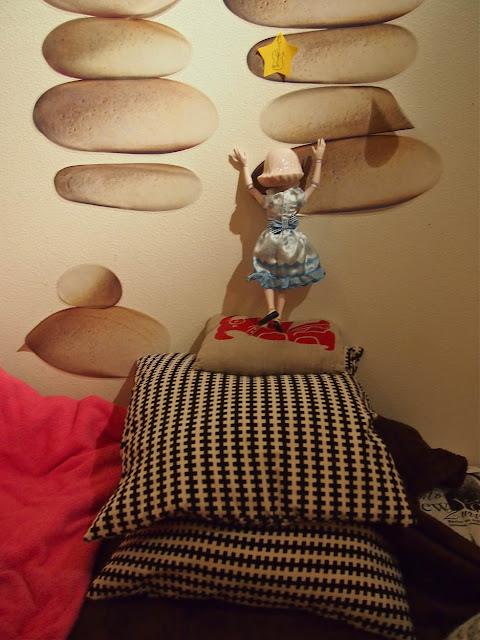 Placing more clues, by dead of night. Q is a sound sleeper, so we didn't have much trouble placing the clues without waking her. 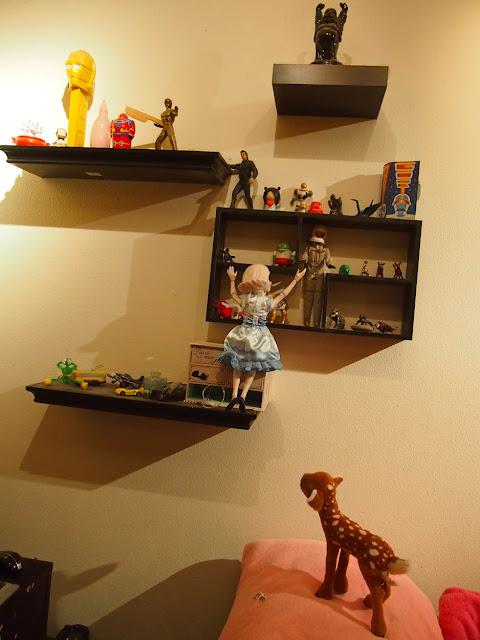 While placing a clue on one of our vintage toy shelves, China Girl scored a follower: Baby Deer, who woke from her charmed slumber. The two have since become fast friends. 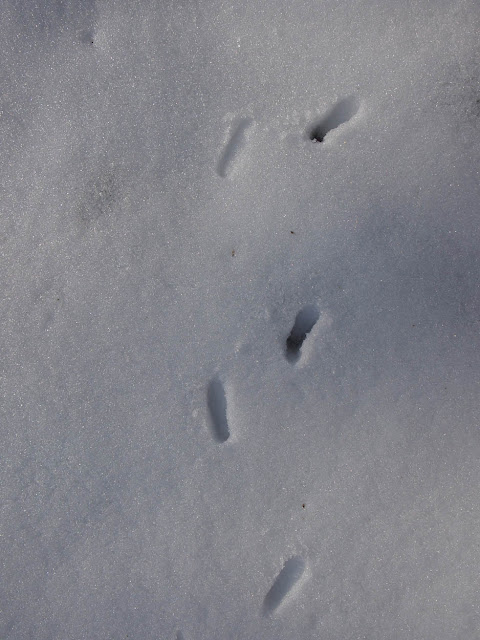 The final clue was to lead Q outside to our ancient apple tree. China Girl had to tread through some fairly deep snow in order to get there, and her tracks remained. 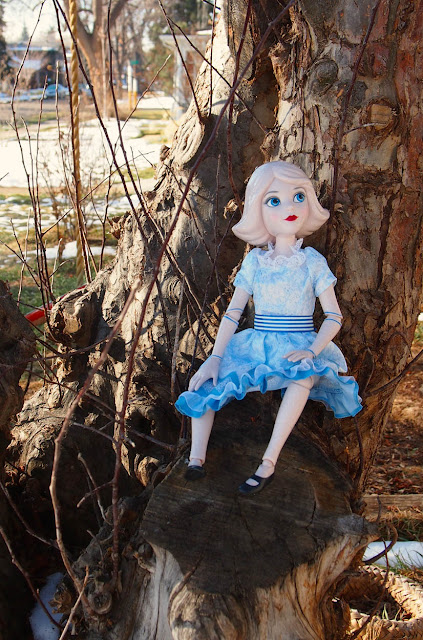 Setting herself up to wait in the arms of the apple tree, for Q to discover when she wakes. 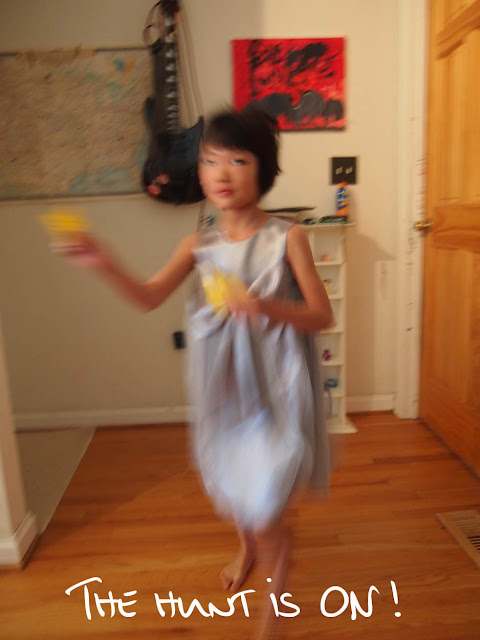 Q woke rarin' to get started on her treasure hunt, and even dressed up in her best dress so as to be prepared for the momentous meeting with her new best friend. 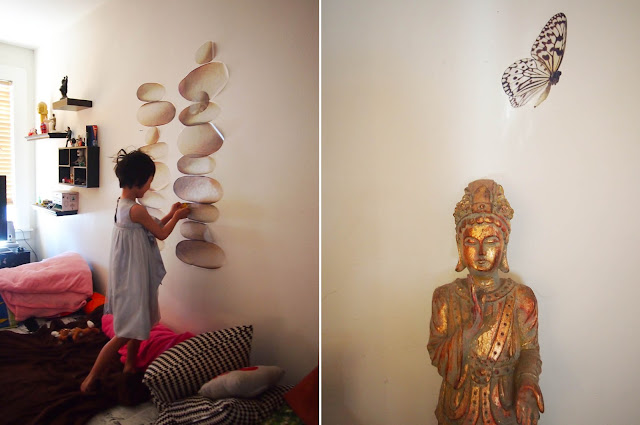 Following clues around the house at hyper-speed. 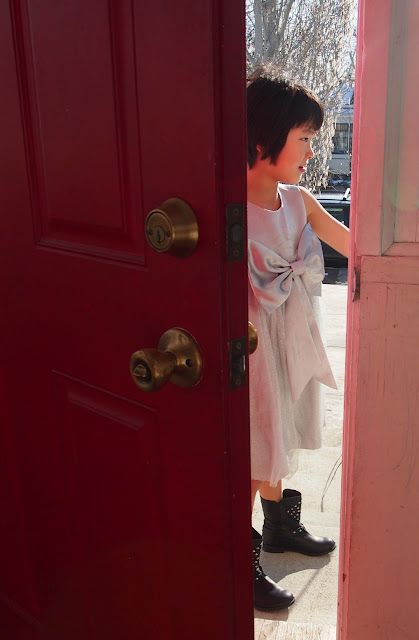 This one leads me out the front door... 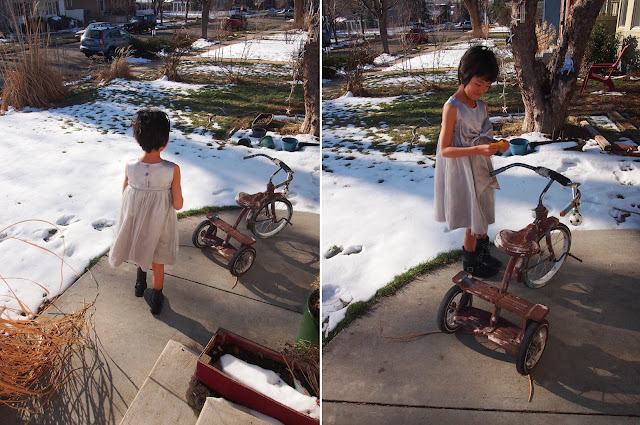 Thank goodness it was a balmy winter-to-spring morning in Denver, so that Q did not even feel the chill in spite of a lingering snowpack. 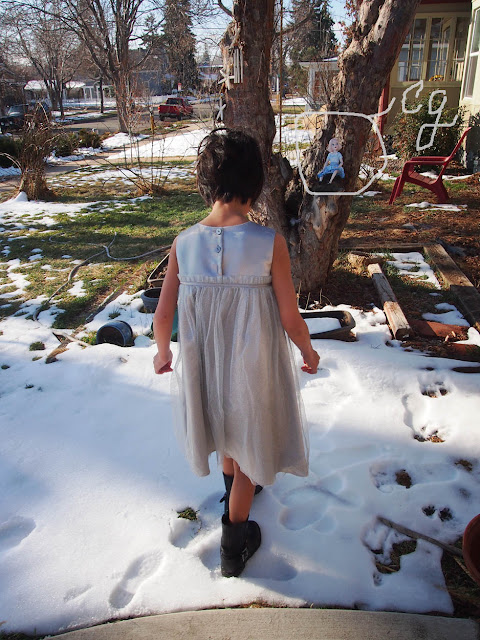 First meeting of the eyes. 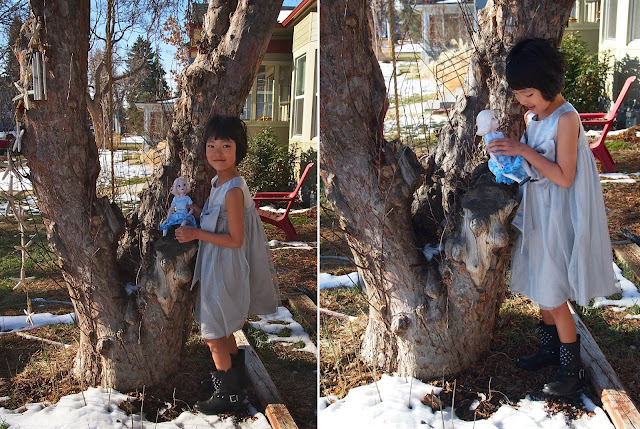 Found! This is how friends are made. 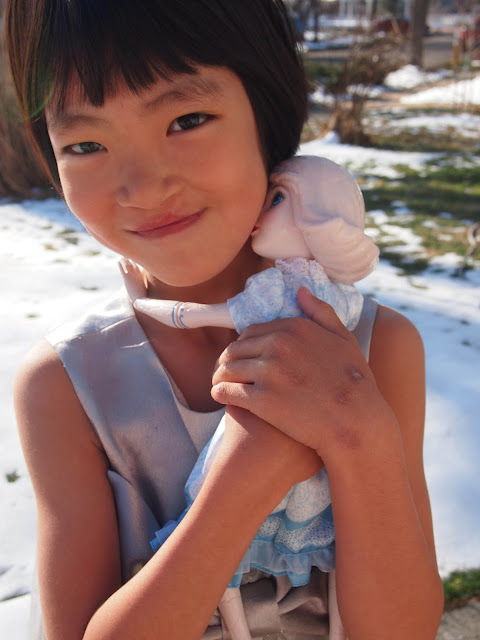 Pure. Unadulterated. Magic.
Posted by Maia at 8:50 AM 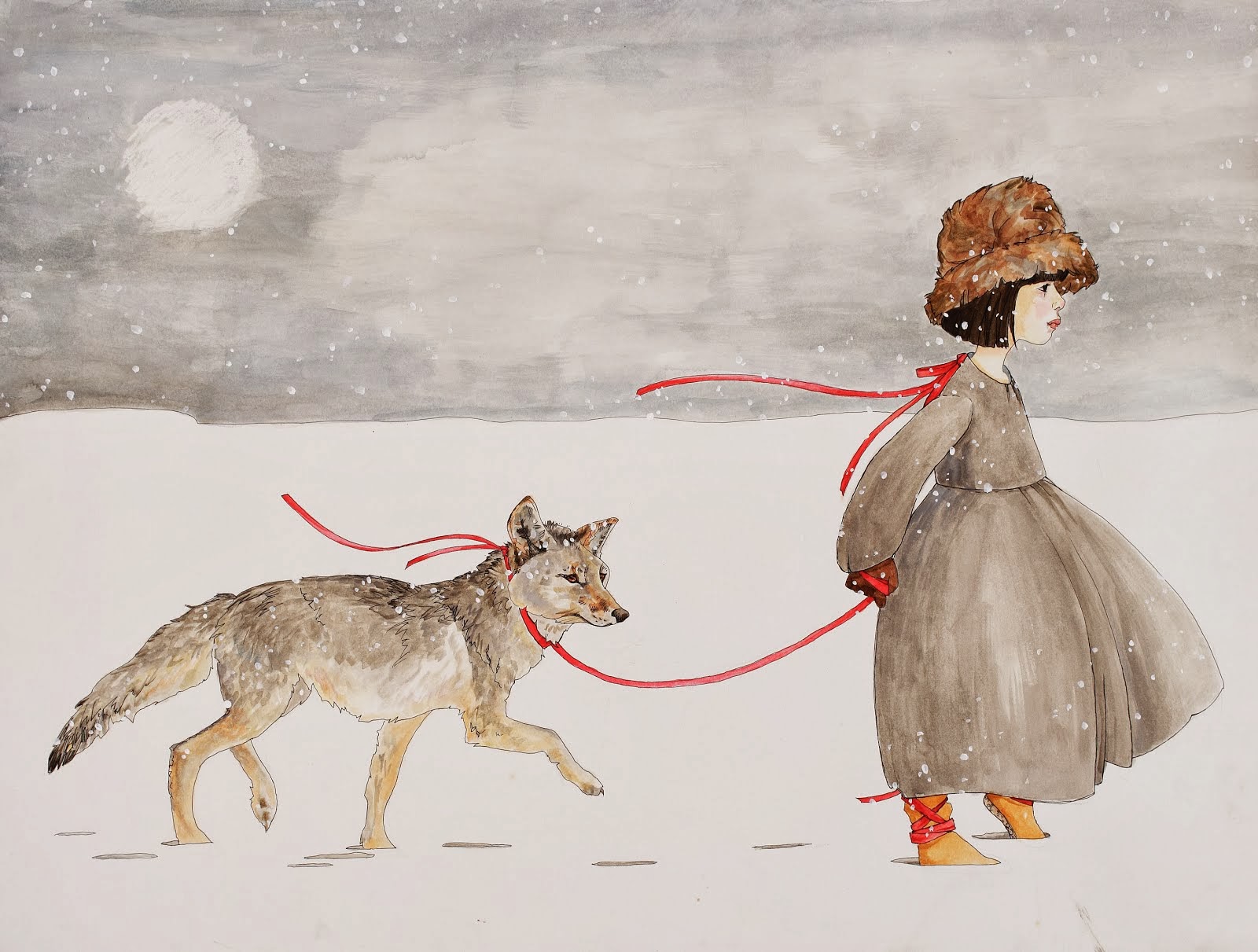